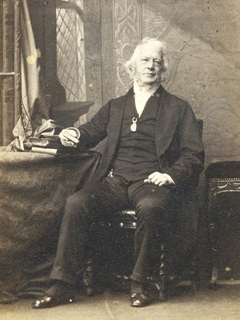 In 1827 Charles installed his son, the Revd Henry Venn Elliott (1792–1865), as the first perpetual curate of St Mary’s Chapel. Under Henry’s leadership, St Mary’s became one of the most fashionable chapels in Brighton, and drew preachers and churchgoers from around Britain and the Empire.

He himself became a nationally significant Evangelical divine and in the course of his work founded St Mary’s Hall, a school for the daughters of poor clergymen, and its associated church, St Mark’s. He was also one of four founder-directors of Brighton College.

Henry’s sister, Charlotte Elliott (1789–1871), was a poet and prolific composer of hymns, including the internationally famous Just as I Am (1835), the royalties from which helped fund St Mary’s Hall. She also edited the Religious Remembrancer. 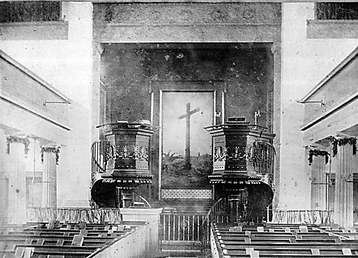 The interior of old St Mary's Chapel, c.1860.
The fall of St Mary's Chapel
After Henry’s death in 1865, his younger surviving son, the Revd Julius Marshall Elliott  (1841–1869), inherited the chapel. A talented mountaineer, he was killed in a fall from the summit of Mount Schreckhorn in the Swiss Alps in 1869. The font in St Mary’s Church is dedicated to his memory and provides an important link between the old chapel and the new church.

The chapel’s ownership thereupon passed to Henry’s other surviving son, Charles Alfred Elliott (1835–1911), a member of the Indian Civil Service and future Lieutenant-Governor of Bengal. As the original act of parliament had granted proprietorship of the chapel for 40 years only, he began negotiations to transfer the chapel to the Ecclesiastical Commissioners. He and his sisters also gave funds to help convert it into a parish church, with a clearly defined chancel and sanctuary, something the existing building lacked.

Building work was underway when, in June 1876, the north end of the chapel collapsed revealing the shoddiness of the original construction. The Elliotts then contributed more money (close to £7,000 in all) towards the construction of the new St Mary’s Church, the cornerstone of which was laid by Charles’s sister Blanche on 29 May 1877.
Knighted in 1902, Emerson is best  remembered for designing the Victoria Memorial in Calcutta and for his term as President of the Royal Institute of British Architects (1899–1902). St Mary’s is his only surviving church in Britain and also his only building to be listed Grade II*.
Commentators have often tried to pigeonhole the style of St Mary's as ‘13th-century French Gothic’  or ‘Early English Gothic’ and found it wanting in purity. But that is to mistake the architect's intentions. In 1884, six years after he completed St Mary's, he explained his approach, calling for an architectural renaissance whose arms shall be long enough and bold enough to embrace the lintel, the round arch and the pointed arch, the picturesqueness of the Gothic vault, and the dignified nobility of the Classic and Oriental dome; where the crudities of Gothic art shall be eliminated and the refinements of Classic art introduced.
On to the Bevington Organ
Back to the Church page
Back to ﻿Home page﻿